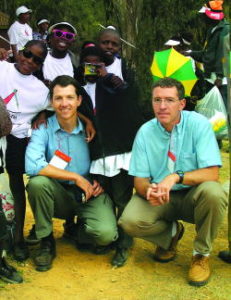 Brothers Abhijatri and Balarka Robinson are surrounded by children at the Nelson Mandela Children ’s Day on September 27th, 2003.

Motto
“Our humanitarian service is not our self-motivated, condescending act of charity to the poor and the needy. It is a gigantic opportunity to feed, nourish and strengthen our own poor brothers and sisters so that they can, side by side, march along with us to proclaim the world-onenessvictory of God the Creation.” – Sri Chinmoy

The Oneness-Heart-Tears and Smiles is a group of friends, including many medical doctors, nurses and other dedicated individuals from all nationalities and faiths, who are inspired to be of service to our needy and suffering brothers and sisters worldwide.
This inspiration has come from international harmony leader Sri Chinmoy, a humanitarian and visionary who believes that together, each one of us can help create a world of harmony through our own self-giving actions. All the participants in this project are volunteers, and each of us undertakes this humanitarian service from the love of our hearts.
We have active participants in almost every developed country of the world and in many of the least developed countries, most of whom are also active members of the Sri Chinmoy Centres International. 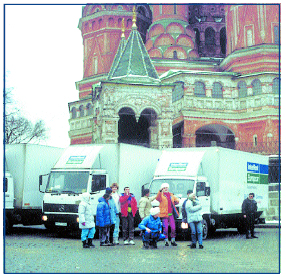 After three days of almost uninterrupted driving from Germany, our convoy covered a distance of 2,500km and reached Moscow on December 27th, 1991. This photo shows the trucks, containing high quality health food and warm clothing, in front of the Kremlin.

How did we begin?

Our humanitarian service began in 1990 by collecting food and clothing for the suffering people of Russia. We sent several convoys to Moscow from Germany in 1991. Two years later, President Mikhail Gorbachev made a special request of our organization to help supply desperately needed chemotherapy medicines and equipments for the nation’s first modern children’s hospital to treat leukaemia and other haematological diseases. In the next three years, we sent large quantities of modern medicines and expensive diagnostic machines to the new treatment centre, plus arranged for highly skilled technicians to offer advanced training in Moscow.

Who has requested our services?

We have been requested to send humanitarian assistance by Mother Teresa for her poorer than the poorest people both in India and in many other countries; by President Mikhail Gorbachev for the children of Russia; by UN Under-Secretary-General Ibrahim Gambari to help relieve the unimaginable suffering in Angola and Liberia; by the Nelson Mandela Children’s Fund; by Mrs. Graça Machel for her Foundation for Community Development; as well as by many national and community leaders worldwide.

What services do we offer? 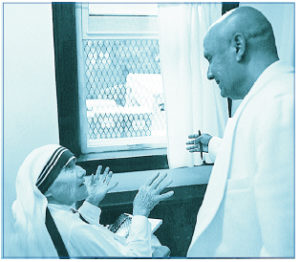 Mother Teresa speaks with Sri Chinmoy just after viewing through a window at her Missionaries of Charity house in the Bronx the 98 boxes of medicines and medical supplies offered to her on June 17th, 1997.

Working closely with national leaders, UN leaders and local NGO’s, we have sent tens of millions of dollars of badly needed assistance throughout the world. We aspire to serve as selflessly as possible and to provide, to the best of our capacity, exactly the humanitarian items they are requesting and so badly need.
Following are categories of items which we have been offering in our humanitarian service projects, and we certainly are eager to add to the types of items we can send, as long as they are requested:

How do we work? 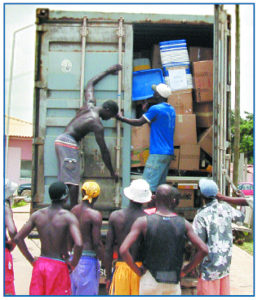 The boxes seen above are part of a shipment of over 37,000 pounds medicines and medical equipment, food, clothing and toys that were sent to Angola from Austria.

Usually we receive a request from a national or UN leader for our humanitarian services. Once we know in detail what is being requested, we work hard to find the often urgently needed items from manufacturers, distributors, large retail chains and enthusiastic citizens in developed countries worldwide as quickly as possible. We also arrange for transportation, by sea and by air.
We always work closely with a local organization to receive and distribute the items. This group is usually a well-established, reliable NGO and sometimes is the requesting government. We follow-up carefully to be certain the most needy individuals receive the items we have sent.

ANGOLA
At the urgent request of Professor Ibrahim Gambari, United Nations Under-Secretary-
General and Special Adviser on Africa, to Sri Chinmoy, millions of dollars of pharmaceuticals, medical and surgical supplies, food and clothing from 13 different countries have been sent to the war-ravaged nation in a pioneering project. At the express direction of the Prime Minister of Angola, making a major policy shift, our 21 sea containers were the first to enter Angola with no duties or other taxes added.

INDIA
As a result of Mother Teresa’s direct request to Sri Chinmoy, medical supplies, basic pharmaceuticals (vitamins, analgesics and antibiotics), children’s clothing, shoes and toys have been sent to India since 1994, as well as to the Missionaries of Charity in many other countries. Large shipments of bottled water for earthquake victims and of eyeglasses have also been sent.

LIBERIA
Immediately following the negotiated end of 18 years of civil war in Liberia last year, UN Under-Secretary-General Prof. Ibrahim Gambari asked Sri Chinmoy to assist in the peace process by providing humanitarian aid. Working directly with the top leaders of the United Nations Mission in Liberia (UNMIL), thousands radios have been sent and will be distributed by the UN to villagers so that they can receive critical information. As well, medicines, surgical supplies and hospital equipment have been sent in large sea containers.

MOZAMBIQUE
Working closely with Mrs. Graça Machel and her Foundation for Community Development (FDC), thousands of boxes of agricultural supplies, water treatment equipment, school supplies, books, computers and hospital equipment have been sent to Maputo. We have also arranged for medical training of local doctors. FDC has requested these items in keeping with their view that people must be given the tools and training to lift themselves out of poverty. 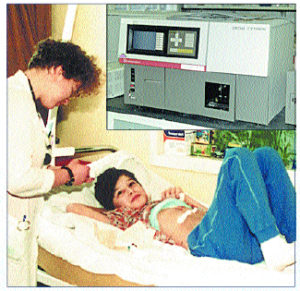 A child is treated at the Research Institute of Pediatric Hematology in Moscow using one of the many of the modern medical machines we sent to the institute.

RUSSIA
In 1993, President Mikhail Gorbachev made a personal request to Sri Chinmoy for help with the first modern hospital in Russia for children with leukemia and other hematological diseases. This began our humanitarian service worldwide. Multimillion-dollar diagnostic and treatment equipment, medicines, hospital supplies, food and more have been sent—often on very short notice in life threatening situations

• Chemotherapeutic drugs for leukemia treatment and diagnostic and treatment equipment valued at 5 million USD.
• Survival of Russian children with leukemia rose from 4% to 70% with use of chemotherapy
• 58 tons of food and clothing valued at $112,000 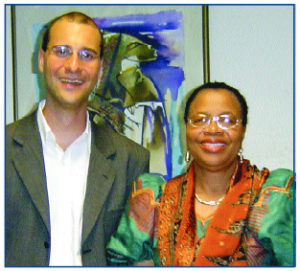 Ashirvad Zaiantchick, a member of our group in Brazil, met with Mrs. Graça Machel at the FDC in Maputo to learn firsthand of their special requests and needs.

SOUTH AFRICA
Medicines, food and clothing have been sent to several orphanages in South Africa that care for many, many children afflicted with AIDS. School supplies, blankets, clothing and toys have been sent specially for programmes with tens of thousands of children in conjunction with the Nelson Mandela Children’s Fund. Large quantities of educational supplies have been received by Archbishop Desmond Tutu’s Child Welfare Society.

TIMOR-LESTE (EAST TIMOR)
Working closely with Prime Minister Mari Alkatiri and his Government, medical and surgical supplies have been sent to this impoverished nation by sea and by air in our ongoing partnership. 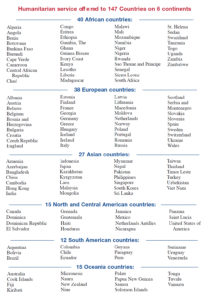