Japan was hit by an earthquake and a tsunami on March 11, 2011. Hundreds of thousand people lost their homes and many of them even their dear ones, relatives and friends. Czech and Slovak children made Drawings of Love to support Japanese children living in the affected areas. Over 1.500 drawings were sent to Japan in April.

1. Report from Japan:
Akanda, our Japanese colleague, went to Shiogama City, Miyagi Prefecture, which had the most loss. He and his friends visited a shelter with 100+ people. The shelter has 30 children, but when they went there to cook hot lunch, only 3 of them were there; the rest had gone out with their families. So he gave the pictures to the 3 children personally, and handed 27 to the shelter leader for the other children. One boy was inspired to make a drawing in return for the Czech friend whose drawing he received. 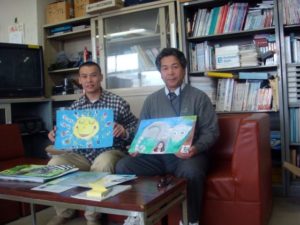 The Shelter leader referred Akanda to a nearby elementary school, which has 600 children. Unfortunately, since schools in those areas postponed the start of the semester (this is the beginning of the new academic year), the school had not started yet (it started the next day), so there were no children but he met the principal and vice principal and gave them the remainder (57 pictures). They were very moved, almost in tears, and the principal said ‘I wish we had the gym.’ The gym had been washed away, and he would have like to have an exhibit for everyone there. He was moved by the Japanese characters the Czech children had written. Akanda said we would come back with more drawings.